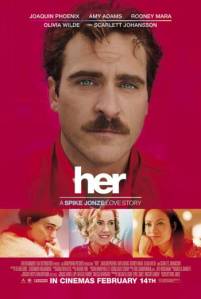 I’m not one for romances but when I find a good one I just can’t help myself! This week we’re going to talk about the movie Her starring Joaquin Phoenix (Two Lovers, The Immigrant, Brother Bear)  as Theodore and Scarlette Johanson (Sing, He’s Just Not That Into You, Don Jon) as Samantha.

Theodore is this sweet nobody who works his daily 9-5, plays video games late at night and makes calls to some sexy hotlines when he’s feeling lonely. He’s trying to get it back together after the divorce of his wife but he’s just not ready to move on yet. He soon learns of new software that’s supposed to help with organization and planning and just keeping your life on track. An artificial intelligence software that’s quickly gaining popularity. So why not? Theodore could use a little life help so he buys one. Once downloaded the software introduces itself (or herself) as Samantha. Instantly Theodore and Samantha form a special bond! Not only is Samantha cleaning out Theodore’s e-mail clutter she’s helping his social life by getting him back into the dating game. But it’s more than that as Artificial Intelligence Samantha finds herself learning and becoming more and more fascinated with Theodore. After one special night, the two find themselves dating! Strange right? Not so much. Her takes place in the near future where apparently its normal to form these special bonds with your computers.

So even though the new relationship is frowned down upon by some it’s accepted by most. Theodore’s friends seem happy for him anyway. But love is a very fickle thing. As Samantha finds out its not always sunshine and butterflies. It’s messy and complicated and whether your human or computer heartbreak happens. But can a relationship as strange as this one really work out? Stranger things have happened, right?

This movie has been around for a while now and when I first saw the trailer I thought: A love story between some creeper looking dude and his phone? Yea-no. But soon after I heard nothing but good things about the movie. People thought this was actually good! Finally, I got the chance to see it myself and you know what? It was good! Really good! One of the hardest struggles that Theodore and Samantha go through is not being able to physically touch each other. It’s a beautiful and almost innocent way to see a relationship unfold with only a mental connection. Their back and forth banter keeps you engaged throughout the whole film. Due to the fact that they only have their voices to keep them company and because Samantha is plagued with so many questions about human relationships and how they work you find your self in the midst of questions such as: why do we do the things we do when we’re in love? Why do we love the people we love? And why do we allow them to hurt us? The answers to this and many more are much simple than you’d think. With talented acting coupled with raw truth, there is really no way this movie could go wrong.

Rotten Tomatoes has Her at 94% fresh! So fresh you can almost smell it!

First released in December of 2013 and in 2014 it won an Oscar for Best Original Screen Play. It’s not every day that I find a love story that I can truly understand but the characters and the emotions that Her put me through just had me all in my feels! And if nothing else at the very least you’ll get a kick out of Samantha and Theodore’s phone sex. Hey, even computers need to get off you know.

← Spider-Man: Into the Spider-Verse
Us →