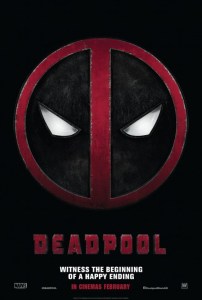 Hold on! I haven’t forgotten an update this weekend! It’s just kinda sorta late is all…but well worth the wait. Valentines weekend brought us the release of Deadpool in all it’s R-rated foul-mouthed, dirty humored goodness!

Hey, Ryan Reynolds (Woman in Gold, Safe House, Just Friends) plays a fun, super hero this time in the form of Wade Wilson A.K.A Deadpool a sword wielding, gun-toting butt kicking comic relief making mad man in a red spandex suit out for revenge on the man who destroyed his life. When Wade and his girlfriend Vanessa played by Morena Baccarin (Spy, Stolen, Death in Love) find out that he has cancer Wade makes a decision for a speedy recovery that will trigger his mutant cells and cure him. However this so-called treatment is run by a sadistic mutant by the name of Ajax or as Wade likes to call him Francis; Ed Skrein (Tiger House, The Transporter Refueled, Ill Manors) who, of course, has ulterior motives that are evil blah, blah, blah. The good news is YES! They are successful and Wade’s Mutant cells cures his cancer and in doing so gives him insane super powers, such as super strength and regenerating body parts and just being really really really hard to kill. The bad news is he turns into a slightly better looking version of Freddy Kruger. Minus the knife hands. Turned into a freak Wade feels he no longer has a place in society, let alone with Vanessa and vows to shut down Francis’s mutant operation…and kill him. Of course. Aiding Wade in his hunt for revenge (sort of) are X-Men Mutants Colossus voiced by Sefan Kapicic (Big Miracle, Tears for Sale) and Negasonic Teenage Warhead played by Brianna Hildebrand (First Girl I loved, Prism).

Great movie! Action packed and funny from start to the very end. As I said before A LOT of dirty humor and profanity…which kinda sucks for kids who love the Marvel movies, but then again there’s no other way to have a Deadpool movie other than with the R-rating so…there’s that. I wasn’t a big fan of the jumping around time sequence thing they had going. Starting from one part of the movie going back two years going back to the beginning and back again to explain whatever. Why not start from the beginning and go from there? However the time jumping didn’t take away from the movie I just thought it was pointless and after a while tiresome. But eventually that stops and we just push forward with the movie. Exciting and fun there was not one dull moment I loved it! Gut’s galore, so be ready for that, bullet through the head with a side of brain matter. There’s a lot of it. CGI was terrific especially with Colossus. Besides getting Deadpool’s character on point and making him an insane baddy with just a hint of justice they also did great work on the visuals. There’s a scene where Wade is trapped in a burning building that is just epicly masterful, director Tim Miller outdid himself and I adore him for it.

Rated R for strong violence and language throughout, sexual content and graphic nudity. I warned you about the rating like three times now. You get it, right?

Rotten Tomatoes has this crude action adventure at an 84% fresh! I think it can do better, but still good stuff!

In this day and age, we are completely dominated by superhero movies so I think it’s a terrific breath of fresh air to have an anti-super hero movie. The weekend has been long since past, so I’m sure you’ve seen this fun film already, that’s why I’m here to tell you to see it again. And if you haven’t seen it yet…seriously?

← Jane Got a Gun
Eddie the Eagle →

One thought on “Deadpool”