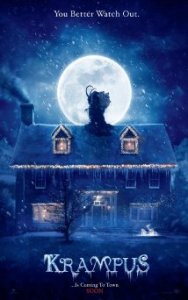 First review in a good minute and I am ready to jump back into it with a good one! It’s that time of year again: Christmas movie time! But Krampus mixes things up for us this year (in a very good way) with a little Holiday Horror.

In this modern-day story of Krampus we have young Max played by Emjay Anthony (Chef, Insurgent, Applebaum) who has had a very bad day. Besides getting into a fight in the Christmas play and having his family too busy to share in the regular holiday activities his cousins out right mock his beliefs by stealing his letter to Santa and reading it out loud to the whole family. More than a little pissed off Max tears up his letter and throws it, along with his faith in Christmas, out the window. Soon after a windstorm starts up, the power goes out, the neighbors seem to vanish and strange snowmen mysteriously begin popping up in the front lawn. Krampus is here; and he’s not alone, he’s brought a sack full of sadistic toys, killer gingerbread men and an army of dark elves! Who ever said nothing brings a family together like an all out Holiday war to save each other from demonic Jack-In-The-Box toys that want to eat your face knew exactly what they were talking about. Can Max find his faith in Christmas once again to stop Krampus? Or is it already too late?

The introduction sets the scene for Christmas as you truly know it today. A toy store is bombarded by greedy shoppers fighting each other for the newest toy craze. And as a dark reminder of the fact that we no longer know the true meaning of Christmas it’s also pretty funny. It reminded me of a lot of scenes from Jingle All the Way still one of my Holiday favorites! That being said, there are a lot of funny moments in this movie, it is listed as a Comedy to clash with the genre of Horror. But as seen with the earlier release of The Visit that can work in a good way. When the family first begins to notice things gone wrong, it takes the simple setting of an eternal white background, an endless snowstorm along with menacing snowmen that began to populate on the family’s front porch to give us the feeling of being trapped. The neighbors have all disappeared, there’s something hungry lurking beneath the snow and then Grandma Omni’s unsettling tale of her childhood visit from Krampus (interestingly enough played out in CGI) and the reason she desperately warns them to keep the fireplace lit at all times. They decided to go the route of puppeteering instead of computer animated (not including the Gingerbread men) for the monster toys. I loved the fact they kept it old school and it was still really creepy. I’m telling you it makes you want to sing Christmas Carols like you really, REALLY mean it!

Rated PG-13 for sequences of horror violence/terror, language and some drug material.

Rotten Tomatoes has this Holiday scare at a 63% fresh! Good stuff!

What makes this a good movie was the interesting and unique story of a Christmas figure we’re aware of but never really cared to dwell too much on. But what makes this a great movie is the uncertainty you feel for the family as they are picked off one by one. Even with all the horror and mayhem it’s still a Christmas movie right? In the end you’re rooting for it all to be a dream Max is having…or maybe that Horror fan in you want’s an ending of heartache and doom! Amazingly enough Krampus gives us an ending that is both; it is gushing with Christmas happiness and cheer and then suddenly you’re hit with dreadful realization. One that keeps the audience guessing and unsure. An ending that is perfect.

← The Peanuts Movie
In the Heart of the Sea →