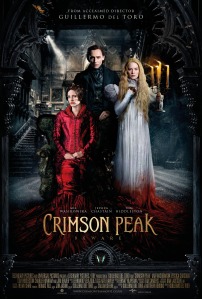 For the past three months it seemed nearly impossible to go to a theater and not be reminded of Crimson Peak’s upcoming release this weekend. Well it’s finally here, and well worth the wait!

Crimson Peak tells a gothic horror story of Edith Cushing played by Mia Wasikowska (Only Lovers Left Alive, Alice In Wonderland, Amelia) who, since the death of her mother at a young age, has always believed in the existence of ghosts. Growing up she takes her beliefs and tries to make them into novels, however, no one is interested in ghost stories only romance stories…that is until Thomas Sharpe; Tom Hiddleston (Thor, Muppets Most Wanted, War Horse) shows up. Not only is he fascinated with Edith’s stories, but he also finds a fascination in her as well, which Edith’s father, Carter Cushing; Jim Beaver (The Frontier, Breaking Bad *Series, Justified *Series) isn’t too keen on. Regardless love prevails even in the wake of Mr. Carter’s sudden death. Suddenly alone in the world Edith decides to marry Thomas and move in with him and his sister, Lucille Sharpe; Jessica Chastin (Interstellar, Stolen, Zero Dark Thirty) in a house high up on Crimson Peak where the red mud seeps up through the white snow giving the vast estate a look of being marooned in blood. The doors creak, the floors groan, the windows rattle, the ghosts are extremely real and it takes Edith no time at all to realize her life is in very real danger. Lucky her childhood friend Dr. Alan McMichael; Charlie Hunman (Pacific Rim, Whatever Happened to Harold Smith?, Cold Mountain) seems to have caught on to the same conclusion but can he make it to London to save Edith before it’s too late?

Now of course, when you hear the name Guillermo del Toro you know that you’re not just going to get a great story but a fantastic visual as well! The dark, gloomy gothic look of the late 1800’s was hauntingly chilly and just in perfect timing for a Halloween movie. Not a dull moment in sight, Jessica Chastin was marvelous in her role as the creepy and dangerous older sister and towards the film’s end she is threateningly scary! And just think in my last review she was captain of a Mars expedition now she’s been thrust back in time as a Victorian psycho killer. That’s just really good acting! The whole cast was great, however it’s Edith, who keeps you tense in your seat as she tries to find answers in the old cryptic house, turning corners, going down forbidden basements and opening all the doors that shouldn’t be open…

Rotten tomatoes have this spooky thriller at a 68% fresh. Ehh not so bad.

That dark look of blood running down the walls of the house are strikingly memorable in this film. As he left us at the bitter end of Pan’s Labyrinth, Crimson Peak also ends with a farewell message to reflect on: that in many shapes and forms  there are things that cannot be seen among us. I’m telling you its the perfect Halloween film! Go see it and have a good scare or…two!

← The Martian
The Last Witch Hunter →