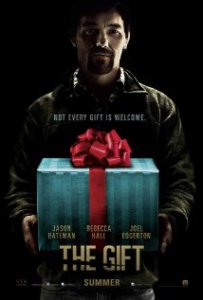 So I was finally able to sneak a review for you this week and man am I excited to give you the new release of The Gift starring Jason Bateman (Juno, Horrible Bosses, Up in the Air), Rebecca Hall (Frost/Nixon, Please Give, The Town) and Joel Edgerton (The Great Gatsby *2013, Wish You Were Here, Exodus: Gods and Kings). Already this dark film has special brownie points from me because guess what genre it falls under? Thriller with a twist at the end! Yes!

Bateman plays Simon, who has just received a new job and is currently relocating to California. The movie begins with him and his wife Robyn played by Mrs. Hall (isn’t she awesome?) looking over a potential home to move into, with these types of stories it’s always the same background: a young couple hoping to use the move for a fresh new start. Because of course they left behind some baggage in their previous hometown in Chicago. Enter in Gordon (also known as Gordo) played by Edgerton, who see’s Simon in a store and introduces himself as an old high school ‘buddy’ (better term might be acquaintances or victim) Simon then introduces his wife and the whole gang makes plans for dinner to catch up in the near future. For Gordon that near future is now with the start of premature gifts left at the house and uninvited visits. He soon wins over the sympathy of Robyn and with that the distrust and suspicion of Simon.

After a very awkward supposed dinner party goes wrong Simon demands that Gordon leave him and his wife alone, no more gifts, and no more unannounced visits. This starts a snowball effect of some questioning and very threatening events. The dog goes missing, the fish that Gordon bought them end up dead, Robyn is always kept with the lingering feeling that she is not alone in the house…which all builds you up for the grand finale the ultimate ‘Gift’ that Gordon bestows upon Simon and Robyn.

The gift is really a masterpiece that tells the story of how the past always has a way of coming back to get you and that some things just can’t be forgiven. There is never once a slow moment in the film, it picks up at an even pace and keeps you there the whole way through. After the note left by Gordon which reads ‘Let’s let bygones be bygones.’ you begin to really wonder about what happened between Simon and Gordon and the mystery keeps you hooked as Robyn delves further into the truth. There is one horrible part in the movie where Simon tries to apologize to Gordon and that goes horribly wrong and you begin to really hate Simon! You see that the bully from high school never really left him and you think ‘I want anything and everything bad that can happen to this guy to happen to him!’ but then you actually see the ending…then you think ‘I might want to recap that first thought.’

Rotten Tomatoes has this exciting thriller at a 92% fresh! Awesome!

This…was fantastic. Everything you look for in a movie. The suspense, the mystery behind Simon and Gordon’s past, the smidgen of horror that you feel with Robyn every time she turns a corner in her home and of course the mother of all, holy crap endings that will leave you with a twisted feeling of revulsion and contempt…strange yet satisfying. Go see this film.

2 thoughts on “The Gift”