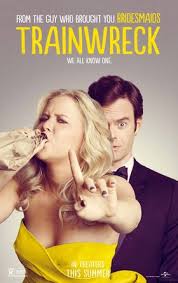 This weekend we have two promising releases, but since pint-sized super heroes just don’t do it for me I bring to you Trainwreck. Starring Amy Schumer (Price Check, Inside Amy Schumer *Series) and Bill Hader (They Came Together, Superbad, Men In Black III).

Trainwreck has Amy playing Amy as a career oriented woman who doesn’t believe in relationships and thinks monogamy is a joke. The idea that love exists has been destroyed by her philandering father, Gordon played by Colin Quinn (Grown Ups, Who’s the Man, Harold) at a very young age. But as a philandering adult herself Amy’s pretty happy with the idea of never finding ‘the one’ or worrying about ‘settling down’ and as for starting a family? Forget about it! She has one rule that she swears by: Never let them spend the night. That rule has served her well during her many, many nightly escapades. And anyway, what does she need to worry about settling down for? She’s got a great job at a magazine company and working on a promotion to become an editor. Amy and her father, who now resides in assisted living, make fun of Amy’s sister Kim; Brie Larson (Short Term 12, 21 Jump Street, Scott Pilgram Vs. the World) for her ridiculous lifestyle of marriage and having kids. All and all Amy’s life is just as she wants it. Until her boss assigns her a job to interview sports medic, Aaron played by Hader, for a magazine article.

As far as rom-com’s go very standard stuff. I honestly don’t see what the hype is about. It’s okay. Not great. There were quite a few scenes that were supposed to be funny (I think) and the theater was just quiet as a mouse. Like Amy’s best friend was weird and the boss was mean and that was supposed to be their comedic contribution. However, when it’s not funny there’s a lot of confusion and “Wait is she just being stupid and the other just being a b!*ch?’. There’s this movie that everyone’s watching with Daniel Radcliffe playing a dog walker with Marisa Tomei…I have no idea what that was about, but they did this joke twice and it sounds like crap because it is and I just didn’t get it. The story was waaaaay longer than it needed to be! My goodness after Amy and Aaron get together we’re just waiting for the plot to unfold something bad to happen so Amy can realize she was wrong all this time and run back to Aaron and tell her she loves him! Why does it take so long for this to happen? We know it’s going to happen let’s move it along! We don’t need all the soul-searching crap, please let’s just get to it!

However I will say this. The laughs were delivered more often than not, so the funny parts outweigh the not-so-funny parts. And the absolute best thing about Trainwreck is how relatable the characters are (Amy in particular…which may be a bad thing). Amy and Bill click perfectly and LeBron James was a lot of fun in the film! All things considered, it ain’t too shabby.

Rated R for strong sexual content, nudity, language and some drug use.

Rotten Tomatoes has Trainwreck at a 85% fresh. I’ve no idea how this happened, but hey…impressive numbers!

Yeah, it makes a nice little date night movie, or a girls night out flick. The basic rom-com stuff and though it is fun it’s nothing really memorable, go to a theater where they serve drinks and you’ll find it a decent enough movie.

← The Gallows
The Gift →