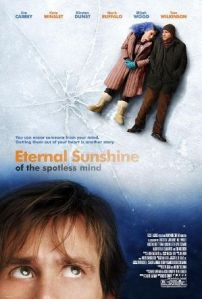 This makes two hidden gems in one month! Really wanted to get out to see that new Dreamworks movie Home but alas…life doesnt work the way you want it to sometimes. But that’s okay because I get to bring you Eternal Sunshine Of the Spotless Mind starring Jim Carrey (Yes Man, Bruce Almighty, Ace Venture Pet Detective) and Kate Winslete (Finding Neverland, Enigma, The Holiday).

In this beautiful film Jim plays Joel Barish a shy, insecure man who has just come out of a relationship that he desperately wants to fix again. However, when he goes to make things right, he finds that his girlfriend (or ex-girlfriend) Clementine Kruczynski, played by Kate, has completely forgotten who he is! Through the explanations of his friends Joel learns that Clementine has gone through a medical procedure erasing all her memories that included Joel and their relationship together. Outraged by this discovery Joel sets up an appointment to have the procedure done to him and erase his memories of Clementine.

Tom Wilkinson (The Lone Ranger, Valkyrie, Rush Hour) plays Dr. Howard Mierzwiak in charge of the procedure with his colleagues Mary played by Kristen Dunst, (Spider-Man, Marie Antoinette, How to Lose Friends and Alienate People) Stan played by Mark Ruffalo (The Avengers, Zodiac, Safe Men) and Patrick played by Elijah Wood (The Hobbit: An Unexpected Journey, Maniac, 9). After asking Joel to get rid of everything that was even remotely related to Clementine and after he takes a huge sedative the good Doctor’s team sneak in to get the procedure started. Once done Joel will wake up, everyone will be long gone and it would be like Clementine never existed.

The fun and wonderful thing about this film is that it really begins inside Joel’s memories which at first are horrendous! Looking at their relationship at the beginning you wonder why they didn’t wipe their memories of each other sooner. All the fights and heated arguments, they just seem miserable together. Each memory is visited as they begin erasing Joel’s mind. In a few of his remembrances with the wild Clementine Joel tries to warn her that she’s the reason that he’s doing this. That soon she will be wiped from his existence forever. But soon they begin finding Joel’s good memories and he very quickly realizes the mistake he’s made.In his mind Joel and Clementine try desperately to escape the Doctors mind erasers. Jumping from memory to memory Joel tries to hide Clementine in his childhood, his embarrassments and his fears to save her from being erased from him forever.

Gosh you just gotta love Jim Carrey in independent films. I love that man! Though his character was slightly annoying due to his non-social personality Jim was able to successfully make his character shine with the awesome chemistry he had with Kate playing Clementine. Slowly but surely you begin to tense with worry, wondering if the two characters will be able to escape Dr. Mierzwiak. The film goes through some fun, trippy effects that one would usually associate with dreams; people, places disappearing, cars falling from the sky, being an adult one second being a kid the next, which is all just really Joel’s memories falling to pieces. The film does a great job of reminding us that there are bad times in life, but they make the good times all the more worth it. And I think that’s a very lovely sentiment.

Rated R for for language, some drug and sexual content.

Rotten tomatoes have this lovely treasure at a 93% fresh! Mmm so fresh you can almost smell it!

One of those few rare romance movies that I adore. Having come out in the spring of 2004 this film is a fun find. In one sitting for a near 2 hours it does something pretty impressive: It makes you hate love or it makes you glad that you’re not in love, it makes you wonder what your doctor is really up to when you’re sedated, and then it makes you want to fall in love all over again. A beautiful gem be sure and pick it up if ever you should run across it.