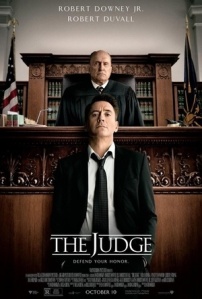 In The Judge we have Robert Downey Jr. (Iron Man, The Soloist, Tropic Thunder) playing Hank Palmer a big shot attorney in Illinois who doesn’t mind letting off the occasional criminal so long as the price as right. During trial one call stating his mother has passed sends Hank on his way home to Indiana to attend the funeral. While he’s there he reunites with his brothers, simple-minded Dale Palmer played by Jeremy Strong (Robert & Frank, Lincoln, The Happening) and older brother Glen Palmer played by Vincent D’Onofrio, god I love him, (Men in Black, Happy Accidents, Sinister). Then there’s his father Joseph Palmer whom is known as Judge both in court and as head of the household played magnificently by Robert Duvall (The Godfather, Days of Thunder, Gone in Sixty Seconds). Between Hank and the Judge there is a very strained father son relationship which manifests from a tragic accident when Hank was a teenager. The ending result being both men resenting each other and Hank leaving his hometown for twenty years.

In that time frame nothing has changed. Hank returns and his father hardly notices him in the room during the wake. In no time at all angry head-butting sparks fly off between the two and just after his vow to never return, just as he’s on the plane ready to leave his hometown for good Glen calls him to inform that his father is the sudden suspect of a hit and run, murder charge.

In this angry compelling story we have Hank fighting to stand up for his father and Joseph refusing his help at every turn. Now this film is movie magic if you love crime shows and court movies. And it’s pure gold if you believe in second chances and the fact that your family is always willing to help you no matter what you’ve done in the past. The acting was phenomenal but when you look at the cast what do expect, right? The only problem I had with the film was towards the end when it’s the final trial the Judge on stand and the opposing attorney Dwight Dickham played by Billy Bob Thornton (Eagle Eye, The Astronaut Farmer, Bad News Bears) questioning him. The Judge says something that plays as extremely dramatic and the Jury and the audience all do the cliché gasp! It was over the top and more funny than dramatic. But other than that it was still a good film. Great film actually.

Rated R for language including some sexual references.

The Judge…no so bueno on Rotten Tomatoes 46% rotten. Ah well…what are you gonna do?

The movie had heart. A little too much of it to be completely honest with you. There will be some tear jerkers here and there as Hank and the Judge work to mend their broken relationship. I wouldn’t call the family/courtroom drama a real reason to rush off to the theaters to see this movie but if you have the time and few bucks I definitely wouldn’t knock it either. Trust me. When all’s said and done and the credits start to roll you’ll find the end result of the movie leaves you highly content. With a teary smile.