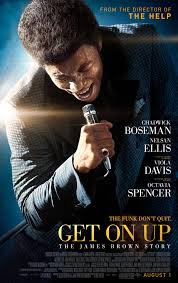 A lot of great movies came out this weekend; we have ‘Guardians of the Galaxy’, ‘What If’ and then we have ‘Get On Up’ starring Chadwick Boseman (Draft Day, 42, The Kill Hole). My dad helped make the decision easy he’s such a big James Brown fan and wanted to see this movie so much! Unfortunately he couldn’t come with me but I’ll be sure to tell him all about it. And he definitely will not be disappointed in what I have to say.

Get On Up takes us into the back-story of The Godfather of Soul. From his childhood in poverty to one of the greatest musicians in history!  The story line is not a hard one to follow but you could get lost if you’re not paying attention only because the time sequence jumps around a lot. We see James Brown as an old man, then as a child then as a teenager as an old man again then to a young adult. Of course each scene is a monumental fragment that helps tell the story and explains James Brown as the man he was.

As a child James had careless parents, the father is played by Lennie James (Lockout, Swelter, The Walking Dead) and his mother played by Viola Davis (Prisoners, The Help, Extremely Loud & Incredibly Close). His mother leaves him with his abusive father who then gives James off to be taken care of by women at a local brothel after enlisting in the army. When he’s a teenager James gets thrown into a jail to serve 5-13 years for a petty theft. That’s where he meets Bobby Byrd; Nelson Ellis (The Soloist, Gods Behaving Badly, The express) who is inspired by James’s voice and gets him out of jail on parole to come stay with him and his family. They start out with a group called The Flames and after a few gigs and dishing out an album to a record company they are soon in the business.

The great story behind Get On Up is the fragile friendship between James and Bobby. The first test of that friendship is when the record company agrees to sign the group on but only if they take away the name to make it just James Brown seeing him and only him as the shinning talent. The band walks out but Bobby stays and you’ll be seeing this a few times where the band holds silent grudges against James but Bobby sticks up for him. There is even a heart wrenching scene where Bobby confides to one of the band members that he doesn’t mind taking the backseat to James’s success because he learned early on that James Brown was meant to be the star and he was meant for second place.

The success grows and you know what happens then don’t you? That’s when the ego starts growing and the next thing you know we’re watching a downward spiral. More than once James tells how he had to take what he wanted to get to where he is. How no one ever looked out for him so he had to look out for himself. And watching his life story yeah you can definitely see where that mindset came from. Soon we’re watching a man whose only belief is that he got to where he is by himself and that there’s no one else but him. And when the friendship between James and Bobby finally snaps and falls apart you worry if James will ever come out of that mindset.

This was a very inspiring film with all the drama and heartache that you can expect from a rag to riches story. Mostly my applause goes to Chadwick Boseman who must have worked really, really hard on those dance moves to get James Brown just right! He was fantastic! I was so impressed I wanted to stand up and try the moves out myself and I’m not the only one. A lot of people in the theater were wiggling in their seats as though they wanted to dance! It was awesome! So I can say the title Get On Up is a very fitting one because it makes you want to do just that.

Rotten Tomatoes gave this funk-a-licious move a 77% fresh. I think it deserves better but still not bad.

This is Tate Taylor’s fourth film directed, one of those films being ‘The Help’ one of my fave movies. I’m going to keep my eye on this guy. I’m really beginning to like him.

I really enjoyed this because even though the music was good and it was really good! It’s not  just the music that grabs you. Mr. Taylor did an excellent job on capturing an incredible story that makes you feel for nearly everyone of the characters. The only real disappointment is that James Brown himself didn’t get to see this film. I’m sure he would have really loved it. You will too.