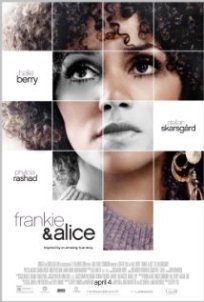 Call me weird if you’d like but I have always been fascinated with multiple personality disorder or MPD. Only one you but other personalities, other you’s living inside of you as well. It’s pretty trippy. But even more so is what triggers this illness. I read that a personality usually splits because of a huge trauma or horrible event in one’s early life. That’s what we get here with Frankie and Alice starring the beautiful Halle Berry (X-Men series, Cloud Atlas, The Call).

In this movie Halle plays stripper Francine Murdoch (or Frankie for short) with a troubled past who finds herself plagued by unexplainable blackouts. Through unfortunate (or maybe fortunate whatever way you look at it) circumstance she is checked into a hospital where she meets Dr. Oz played by Stellan Skarsgard (The Girl with the Dragon Tattoo, Thor, The Avengers) who treats her and discovers there are two other people living within Frankie. ‘Genius’ a smart child who tries to help Frankie and then there’s Alice a southern racist white woman who hates that she shares Frankie’s body. With the help of Dr. Oz Frankie must open some dark doors of the past to find the origin of these personalities so that she can take control of herself and her life. Also starring in the movie are Phylicia Rashad (The Cosby Show, For Colored Girls, Just wright)  who play’s Frankies mother Edna and Chandra Wilson (Greys Anatomy, A Single Woman, Strangers with Candy)  who play’s Maxine Frankies sister.

The movie is set back in the late seventies and is said to be based off of true events. The film was released originally in 2010 but for some reason was shelved away till now. Here’s the thing with this movie. The idea is fascinating. Like I said before these types of stories always attention grabbing and hardly ever fail but this movie here…it lacks. Lacks what? I don’t know. Other critics say it was the melodrama acting and there are others who say the movie was just way past it’s time. I think the acting is great, the switch up between the identities is done so perfectly by Halle and I would think not a small feat to accomplish, but the story line itself was just so typical. Dr. Oz’s encounters with Genius and Alice were short and the best part of the movie is when the Dr. is able to locate the heart-wrenching secret that is the reason behind the personalities and that, of course, happens towards the end. So before that what have you got? And without the personalities what else is there? Just a confused woman getting help from her doctor. Nothing more nothing less.

Rotten Tomatoes gave this movie a 21% rotten on the scale. Yikes. Rated R for some sexual content, language and drug use.

It pains me to say this but there are much better movies playing on the big screen right now. Frankie and Alice wasn’t terrible but not worth movie theater viewing. Wait a while. It’ll be in Redbox before you know it.